You are here Home » News & blogs » History of the Czech Beer

History of the Czech Beer

Facebook Twitter Google+
Beer in most countries, especially around Europe is an everyday beverage of almost all people from different walks of life. It is a permanent part of their lifestyle.
Czech Republic is known for it's historical, well-preserved architectures but is also widely known for it's beer production. Beer in engraved in every Czech. They even call beer as "the liquid bread". Most Czechs drink only Czech beer. Reason being is quite obvious. Czech brewing has a long history and Czech beer is among the best beer in the world.

At present, there are countless kinds of beer in the market.

There are 2 main types of beer:

Then it could be further be divided according to color:

Top-Fermented beers are usually brewed in Great Britain, Belgium and partly in Germany and France. Most of today's beer are Bottom-Feermented Lager Beer.

For more than a thousand year, the history of Czech brewing has been uncertain. Only a few years ago that the historians unravelled proofs of the earliest brewery. It is almost certain that the first brewery iun Czech Republic was founded in 993 at Brevnov Monastery in Prague. During these days, almost all brewing were done in Monasteries. It was until Pope Inocent IV ended the 250 year ban on brewing other than in Brevnov Monastery around the year 1250, that the rights for brewery were granted to the cities in the Czech lands. Breweries were then founded in Svijany, Plzen, Ceske Budejovice to name a few. 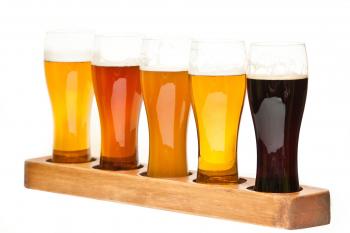 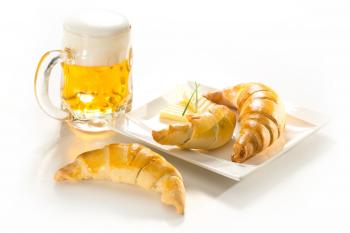 There were 2 types beer. A cloudy wheat beer using the so-called Top-Fermenting beer known as "Bile Pivo" or white beer and the other type of beer known as "Stare Pivo" or the old beer using the Bottom-Fermenting process. The beer is conditioned at a low temperature over a long period of time. This process is called Lagering.
But this process slowly was lost in the Czech lands though persisted in the neighboring countries of Bavariaduring half of the 15th century.

Breweries were founded all around Bohemia and Moravia. Brewing rights were often given to the noble families and homeowners of a town or city.
Soon war broke and many breweries were destroyed including the oldest brewery in Brevnov in Prague. It was sacked together with the Brevnov Monastery in the year 1420 during the Hussite wars. But it was rebuilt in 1720. Top-fermented beers made of wheat were now being produced during this time. It was the era of "The Bile Pivo"
By the early 19th century, progress began to happen. Transportation improved, thus importing and exporting started. Bottom-Fermented beer came to Bohemia from Germany. Soon drinkers fell in love with the taste of the Bavarian beer . A dark beer with a crisp and refined taste. And so people at that time forgotten "The Stare Pivo" of the Czech brewers.

The success of the the Bottom-Fermented beer was quite a surprise to the brewers that they decided to produce an imitation of the brew. In Pilsen, the brewery came up with a different way of Bottom-Frementing which served as an important difference. What they did was dry it's malt, using an English malt-kiln in an indirect heat. The result was exactly like the Bavarian beer but it shined with a beautiful golden color instead of the dark color. The brewery that was owned by 250 residents of Pilsen with the brewing rights was a huge success. This success inspired other Czech Breweries to switch to bottom-Fermenting.
And so the evolution of breweries came about all over Czech republic. Bottom-Fermenting was what all breweries were doing. If a brewery couldn't make the switch, it closed. And so the oldest brewery in Brevnov were it all beagan closed in 1889. After being destroyed then rebuilt.

The remaining of the 19th century brought a large num of industrial breweries . Refrigeration began. The wheat beers that were quite popular beers totally disappeared.
When the communist era began in 1948, many brew pubs were closed. The St.Thomas brewery in Prague's Mala Strana district was natinalized and shut down in 1950. Inspite of the  communism, the czech beer unexpectedly benefited from it. Since no more investments were being made, the Czech breweries just continued operating through traditional methods of brewing and malting which disappeared everywhere else in Europe. By the time the Velvet Revolution came in 1989, the brewers in the Czech Republic earned the reputation as "The Keepers of the Tradition".

Beer in the Czech Republic has gone through a rollercoaster of success, good times, dark times, bad times and back. Since 2007, over 100 breweries have sprouted. A variety of beer has about. Wheat beer that was long forgotten is now back and Top-Fermention method is back.
Now to date, the country boasts of 255 breweries spreaded all over and more opening each month. In Prague alone, it has at least 22 breweries.

And the best part of the story is that... the oldest brewery in Brevnov Monastery which opened in the year 993, was destroyed during the war, then rebuilt, then closed has now re-opened last 2013..
This is one brewery in the world i wouldn't miss on visiting when i go to the beautiful Czech Republic.