Facebook Twitter Google+
TAAG Angola Airlines E.P. is the state-owned national airline of Angola. Based in Luanda, the airline operates an all-Boeing fleet on domestic services within Angola, medium-haul services in Africa and long-haul services to Brazil, Cuba, China and Portugal. The airline was originally set up by the government as DTA – Divisão dos Transportes Aéreos in 1938, rechristened TAAG Angola Airlines in 1973, and gained flag carrier status in 1975. It is now a member of both the International Air Transport Association and the African Airlines Association.

The origins of the carrier trace back to 1937, when the president of Portugal Óscar Carmona commended Joaquim de Almedia Baltazar to create an airline in Angola.

Operations began on 17 July 1940, using De Havilland Dragon Rapide biplanes. First routes to be operated were founded by the Aero Club of Angola and included two main lines: one running between Luanda and Pointe Noire, having connections with Aeromaritime services to Europe, and the other being Luanda–Benguela–Lobito that was later extended to Moçâmedes.

Flights were intermittently discontinued during World War II due to the scarcity of spare parts, but by the end of the war the airline resumed operations.

Following renaming to TAAG – Transportes Aéreos de Angola on 1 October 1973, the airline was reorganised and reconstituted. The company's shareholders at the time were the Angolan government (51%), TAP Air Portugal (29%) and ex-DTA employees (20%).

TAAG has its corporate headquarters in Luanda, Angola. The airline also has offices in Africa, Asia, Europe, and North and South America, and opened an office in Chaoyang District, Beijing, in 2010.

As of October 2014, TAAG Angola Airlines serves 31 destinations, including 13 domestic, 11 in Africa, three in Latin America, two in Schengen Europe, and three in the Middle East and the Asia-Pacific region. 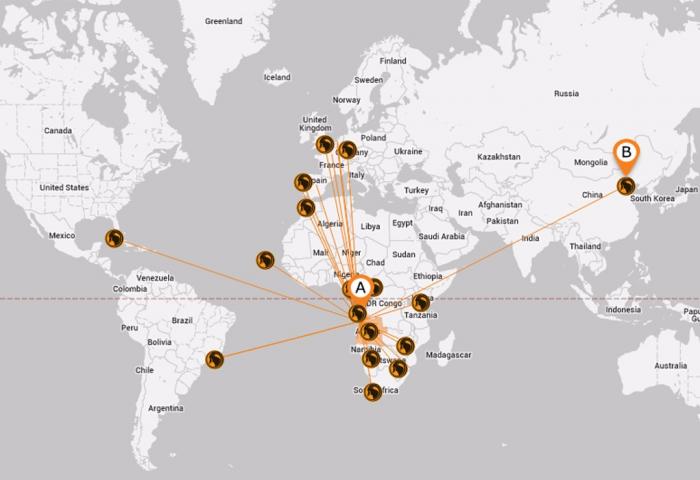