Facebook Twitter Google+
The Slovak cuisine has it's variety, depending on the region. It has been quite influenced by neighboring cities but it has done the same as well.

The traditional Slovak cuisine came from the times when most Slovaks lived by being self-sufficient. With very little food imports and exports, and no modern means of preservation or processing, the Slovak food depended heavily on a number of staple foods that would be able to stand summer and the cold winters.

Wheat was ground and produced bread, dumplings and noodles. Potatoes were mostly boiled and processed and turned into a dough. Milk was processed and turned into butter, cream, buttermilk, sour cream and cheeses. All of these were usually produced and processed by families themselves with some local trade at the country markets.
Animal fats and butter were used instead of cooking oil. Spices were not really used.

Cabbage, onions and garlic is a must. Slovak food is hearty and typical of a country with strong rural roots.
Slovak's National food is something like GNOCCHI. It is called HALUSKY but traditionally called "BRYNDZOVE HALUSKY" (Sheep Cheese Gnocchi). What makes this dish unique is the flavor of the Sheep Cheese that gives a strong distinctive flavor and it gets tastier because of the small pieces of bacon greaves and herbs like chives or dill.
ZINCICA, a sour milk is usually served with this dish. 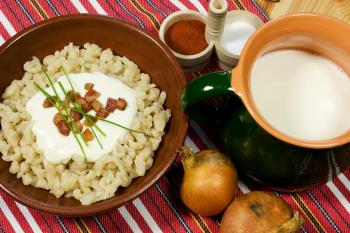 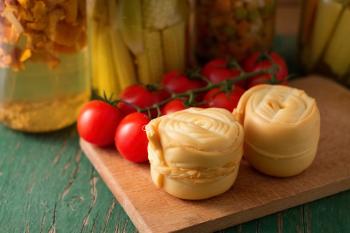 Other traditional Slovakian foods are:

Traditionally, the main meal of the day is lunch, around noon. It usually consists of a soup and a main course.